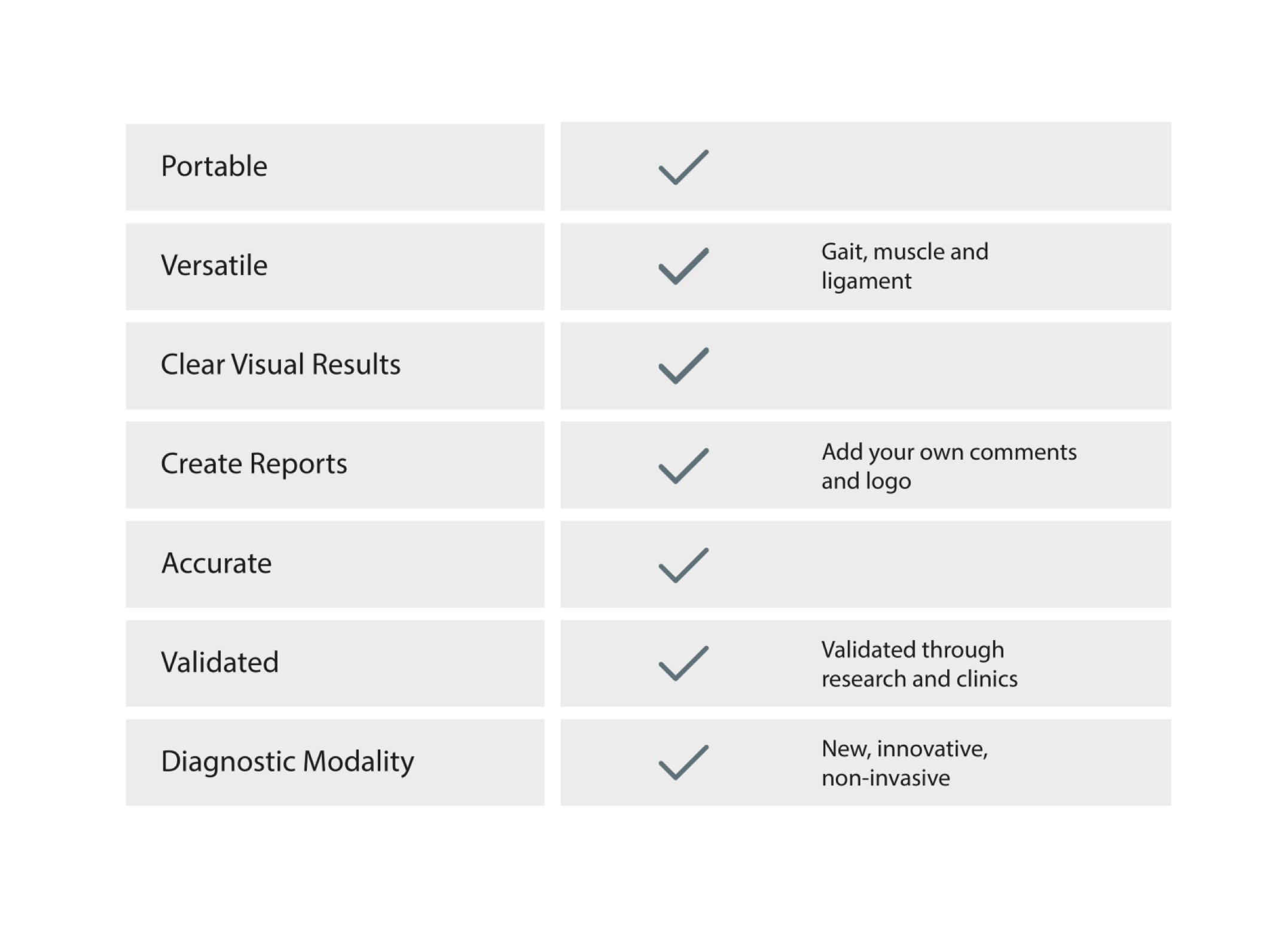 Muscle Analysis Showed that Training Was the Solution for Gait Irregularities

Tanaka was the cutest 5 year-old Anglo-Arabian gelding you could imagine, and I bought him with a view to distance riding. Prior to the purchase I had Tanaka examined by a Vet and had all four legs X-rayed. There was just a single comment with regard to his right hock, which according to the Vet would not have any significance for distance riding.

I had started with some shorter distance events of up to 25 km, when I participated in a clinic with a Vet who specialized in imbalance in both riders and horses. It was here that I was told that Tanaka had gait problems and should be allowed a weeks rest. After this, things went well until we took part in an event where a Vet said at the finish line that Tanaka seemed to be suffering from muscle fatigue. About one month later Tanaka started to become lame. It was as though he tried to reduce weight bearing on his fore limbs by moving his head to the side and making some odd hops, but only in the trot and with a rider. My Vet did flexion tests, but could only find a possible sign of lameness in the left fore leg. I was offered a local block injection but chose instead to try help from a Chiropractor. This did not give any results, and subsequently the Vet believed that Tanaka was lame on all four legs, perhaps as the result of a sore suspensory-ligament tendon, which was most likely due to growth spurts. Whilst Tanaka remained immobilized for the next 6 weeks, he is treated by a new blacksmith and gets new shoes which appear to help as Tanaka does not seem to have pain any more.

We start re-training but when we get up to training distances of about 12 km, he becomes lame again. I start to become worried now that the recurring lameness will end in Tanaka being put to sleep. In the meantime I became aware of the existence of MyoDynamik and get in contact with them asking for their help.

I subsequently get a full gait analysis for Tanaka in the trot, which shows that my horse is not lame, and an AMG muscle analysis, which shows that the muscles in Tanaka’s right hip are badly damaged and un-coordinated. The result has been that without further worries, I have been able to ride Tanaka, but that I have also learnt to ride with more balance, which I have had help with, so that I could re-build the damaged muscles on Tanaka.

Things progressed with Tanaka and 10 months later we did another AMG analysis. This shows that the damaged muscles have become much more coordinated. It is important though that Tanaka is warmed up prior to training as the AMG analysis revealed that there is an 18% difference in signal between the right and left hips before the start of training and only a 5% difference after 10-15 minutes of warm-up. From a video taken in slow-motion it can be seen that Tanaka is perfectly synchronized in his gait in the trot.

Today 15 months after the first muscle analysis we have begun to take part in point-giving distance rides and are now riding approximately 50 km’s. Tanaka is moving like a dream and continues to improve his hip muscles.

I can strongly recommend MyoDynamik and their muscle analysis. I was greatly eased after their measurements, so much so that I had the confidence to start riding again, albeit with much more focus on my balance so that Tanaka could rebuild his muscles.

We Found the Reason for Recurring Lameness by Using Muscle Analysis

My daughter had done really well at dressage events as a pony rider, and it was with future success in mind, that I bought her the first horse. We got help by knowledgeable horse enthusiasts to select a qualified horse, one that had shown potential at the Danish 5-years Championships, and had subsequently won competitions. From the first day my daughter sat on the horse, she was in love with it, and we decided to buy it even though it when ridden was crooked along one side going with the hindquarters towards the center at the left-handed circle. The horse had already been x-rayed and the pre-purchase veterinary examination confirmed that the horse was crooked, but no more than could be treated with the help of a chiropractor.

Therefore we have a chiropractor to look at the horse from the beginning, and we are informed that the horse is tense along the one side. Unfortunately, my daughter only participated in a single event before the problems really began to present themselves. Over the next 2½ years we experience that the horse is diagnosed with a sesamoiditis in its left forelimb, a suspensory ligament injury in the left forelimb, a suspensory ligament injury in the right forelimb, an operation to correct fused tendons in the knee of its left hind limb and yet it suffers recurring inflammation and lameness. In the meatime, the horse begins to develop behavioral issues such as suddenly rearing up, throwing itself to one side or making abrupt stops.

Altogether, we had four veterinarians to look at the horse and a vast number of admissions, before we met almost be coincidence a new veterinarian who could perform a muscle analysis. Since we had not previously considered if there could be something wrong with the muscles, we choose to have the muscle analysis performed. Our horse had sensors placed on the withers, the mid back and the croup (lower back, lumbar) on both the right and left side. Whilst the horse moved, we could see on a screen exactly how the muscles worked. The picture was normal for the withers and the mid back, but for the croup, there was a big difference right compared to left hand side. On the left side, the muscles worked intensively but within the normal range whilst on the right side in contrast there was almost no signal. This came as a huge surprise, the results show that the innervation to this muscle is almost completely damaged and because of that, the muscle barely functions. The surrounding muscles have compensated for the almost totally crippled muscle and this has most likely been the cause of all the problems we have experienced.

We knew when we bought the horse that whilst in transport after a Danish championship it had gone through the bottom of the transporter with one of its hoofs. Later on though we heard a different story, not only had its hoof gone through the floor, in fright the horse had totally destroyed the transporter, which perhaps explains the muscle injury sustained to the right side of the croup. A horse that has kicked a transporter to pieces will have over strained its whole body. Based on the muscle analysis and the start of chronic pain in one of the forelimbs, due to scar tissue after injury, we chose to have the horse put down.

I really hope that a muscle analysis becomes part of a standard pre-purchase veterinary examination in the future, so that others do not have to go through what we have experienced, and I will never buy a horse again without first getting it checked using a muscle analysis. Furthermore, we could have used a muscle analysis during the many re-training periods to ensure that we did not over-work the horses muscles following an injury. In general terms, a muscle analysis could also have been used during riding right from the start so as to better understand why our horse performed as it did under training.

It started when my horse twisted its right hock at the paddock. It was given joint treatment and box rest, after which I started to re-train my horse very carefully. Over the next 6 months it was only trained from the ground and taken on walks. Thereafter it was very carefully and gradually trained with longeing work and a rider. It was only after an entire year that I started to do some harder works with my horse. It was not lame, but I did not feel that the muscles on the right-side were as well developed as those on the left-side of my horse, despite the very careful re-training program. I had got my horse checked by a chiropractor during the re-training period, but they were not able to do anything further. It was at this point in time that I had the opportunity of having my horse checked out for an AMG (Acoustic MyoGraphy) muscle analysis.

The horse was fitted with AMG-sensors on the back (m. Longissimus dorsi) and was being longed both in a right- and left-handed circle for the three gaits – walk, trot and gallop. The results showed that during walking and trotting, my horse used its muscles on its right side less than on its left side, irrespective of whether it was a right- or left-handed circle. In contrast, it used its muscles evenly on both sides whilst galloping both in a right- and left-handed circle. This was a surprising result for me, as it showed that my horse was less prone to injury whilst galloping, rather than trotting, which one would otherwise use as a gentle form of re-training. After this, I started to train more in the gallop after a period of warming up, both in the arena and in the woods. Gradually, over the next two months I begin to see an improvement in the muscle mass on both the right and left sides, all along the back, the shoulders and the neck. I could also feel an improvement in the stability of the horse during the gallop, with better hind limb action and increased balance. Now it is 3-4 years on, and the injury has not recurred.

I believe that while my horse was ill, it had tried to compensate for the injured side, and had as a result become weaker on that side. However, even after it had recovered and was well again, it continued to use itself in this unbalanced fashion. I really thought that trotting would be the best way of re-training my horse, as it is a more synchronized gait. In fact it was as though my horse communicated with me, through the muscle analysis, as to how best to re-train it. If I had not been given this information then re-training would most likely have resulted in my horse having a crooked body and musculature.